I concede the stage today to Glenn Greenwald, who lays out the charge compactly:

FOR YEARS, THE Supreme Court’s 5-4 decision in Citizens United was depicted by Democrats as the root of all political evil. But now, the core argument embraced by the Court’s conservatives to justify their ruling has taken center stage in the Democratic primary between Hillary Clinton and Bernie Sanders — because Clinton supporters, to defend the huge amount of corporate cash on which their candidate is relying, frequently invoke that very same reasoning.

and then proceeds to support it with a devastatingly detailed brief.

[In Citizens United] A primary argument of the Obama Justice Department and Democrats…was that corporate expenditures are so corrupting of the political process that limits are justified even if they infringe free speech….[But] Justice Anthony Kennedy, writing for the five-judge conservative majority [argued]:

independent expenditures, including those made by corporations, do not give rise to corruption or the appearance of corruption.

….That key argument of the right-wing justices in Citizens United has now become the key argument of the Clinton campaign….Clinton supporters in 2016 are denying the corrupting effect of direct campaign donations by large banks and corporations and…huge speaking fees paid to an individual politician shortly before and after that person holds massive political power.

As Greenwald notes, such a claim goes beyond even the Supreme Court’s contention that ‘independent expenditures…do not give rise to corruption.’ Moreover, depressingly enough,

Another critical aspect of the right-wing majority argument in Citizens United was that actual corruption requires proof of a “quid pro quo” arrangement…basically, bribery….That, too, has become a core Clinton-supporting argument….Conversely, the once-beloved Citizens United dissent…was emphatic in its key claim: that there are many other forms of corruption brought about by corporate campaign expenditures….large amounts of corporate cash are almost inevitably corrupting, and certainly undermine trust in the political system, because of the many different ways…that corporations convert their expenditures into undue influence and access: 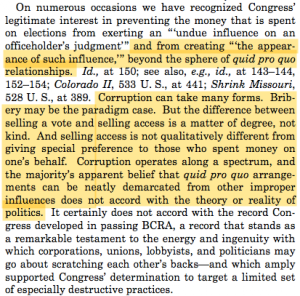 Clearly, this election season has taken us  into fantasy land, where conventional liberal pieties have been dispensed with, age-old manifestos consigned to the flames:

….Clinton supporters insist, the mere fact that a candidate is receiving millions upon millions of dollars…from Wall Street banks, hedge funds, and large corporations is not remotely suggestive of corruption….[they] have resorted to denying what was once a core orthodoxy of Democratic politics: that big corporate donations (let alone being personally enriched by huge Wall Street speaking fees in between stints in public office) are corrupting.

One more merger point between ‘right’ and ‘left,’ conservative’ and ‘liberal.’ That’s a ‘bipartisan consensus’ to look forward to, especially when the Republican Party will gleefully point to this claim being made by Democrats. The most salutary effect of this abominably long election season has been the simultaneously gratifying and dismaying confirmation of the utter corruption of the political process, and the concomitant need for a radical–you may, if you prefer, call it ‘revolutionary’–transformation to be induced in it. What we have simply won’t do.