I’ve seen fights, disputes, grow, fester, erupt into bouts of violence: disagreements become irrevocable, boundaries are crossed, and then, tempers flare. Punches and slaps are thrown, sometimes half-heartedly, sometimes in a desperate flurry, sometimes shirt collars are grabbed as the ‘fight’ turns into an ungainly grappling session with headholds and chokeholds that aim to incapacitate. When the smoke clears, the protagonists emerge bruised and battered with a bleeding nose or lip–the former is more visually striking, liable to cause alarm, as red stains make their way down jaws and shirt fronts. On rare occasions, the fights have turned especially ugly: once, a young man picked up a rock and hit another on the face with it, splitting open a gash that instantly turned crimson, on yet another, a small piece of wood was pressed into service for the same purpose with the same effect. Drunken fights–like those I have witnessed on umpteen occasions at baseball games–are always infected with a touch of the comic; the fighters fight to stay on their feet even as their impaired co-ordination prevents them from landing a meaningful punch or avoiding the blows that come their way (the infamous ‘why don’t you step on outside’ brawl at bars often showcases such encounters.)

I’ve never seen a fight, yet, turn deadly. No one got stabbed with a screwdriver or a knife and bled to death. The folks I saw fighting didn’t own or carry guns. But if they had, they might have pressed them into service, seeing in them a speedy resolution of a nagging irritation that had turned unbearable. Which is what a lot of folks all over the US seem to do–as the Parents Against Gun Violence page on Facebook reports, the following are some of the reasons Americans pressed guns into service in the month of May this year: 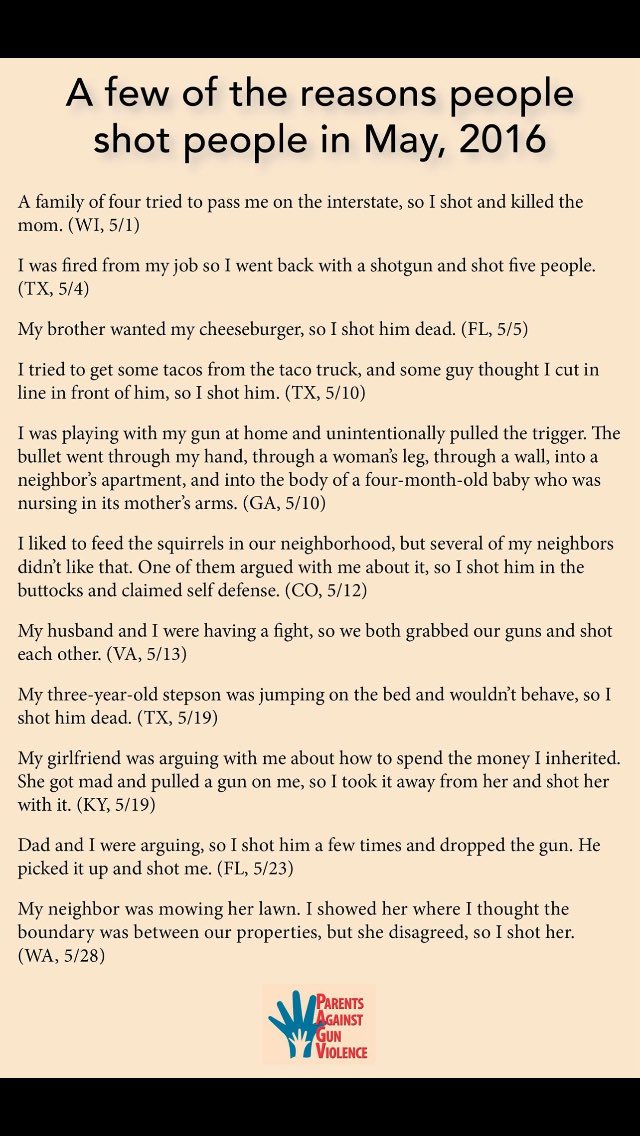 As you can see, the formula is pretty simple, and can be boiled down to a few essentials: see fellow citizen, enter into dispute with fellow citizen, reach point of irresolvable difference, settle dispute with gun. Sometimes alcohol, that most popular of all legal drugs, is also implicated, but it needn’t be; sometimes it is men doing the shooting, but not every single time; sometimes children get into the act. Traffic conflicts, workplace hirings and firings, prickly neighbors, property wrangling, domestic arguments–these can all be expeditiously settled with a firearm. (Road rage in the city and on highways has a long and dishonorable history of featuring guns in its eruptions.) Perhaps a handgun is used, perhaps a shotgun, perhaps an assault rifle. It does not matter; they all shoot bullets, they all shut a yapping mouth, they still a flailing body. They make the irritating person who won’t shut up go away.

Homicidal rage, the kind that results in violence, is always dangerous. It is made especially so when it can be coupled with a firearm. A gun promises a dramatic and satisfying denouement, a fantasy of forceful resolution, an imposition of our will on a stubborn and difficult world. It will always provide a dangerous and alluring temptation.

4 thoughts on “Have Gun, Will Settle Dispute: The Dangerous, Alluring Temptation”