Yesterday, I made note here of my activities on the first of a pair of days of guided climbing in New Hampshire’s White Mountains. Our plan for the second day was to try to summit Mt. Washington, a beastly business in the winter. I had hoped a) to become proficient enough in climbing to attempt one of the gullies in either Huntington or Tuckerman Ravines as an ascent route and b) that the avalanche risk in those ravines was low enough to allow us to do so. Neither conditions were realized; I was still far away from being competent enough in climbing to try to do a gully ascent, and moreover avalanche risk ran high in those ravines (the Forest Service assesses the ravines’ conditions and posts updates on their website.) We would stick to the standard Lion’s Head Winter Route.

On Saturday morning, Nick Aiello-Popeo (of Synnott Mountain Guides) and I geared up at the AMC’s Pinkham Notch Visitor Center and set off; the snow lay thick about us, and kept falling lightly. I found the going hard; winter hiking is slow and tedious at the best of times. I was also still coming to grips with the cold-induced clumsiness and stiffness; everything–putting on crampons, changing layers, grabbing a quick snack–was harder to accomplish. Once the Winter Route began, the slope pitched steeply upwards, and some caution, including roping up, was required on a couple of sticky sections. 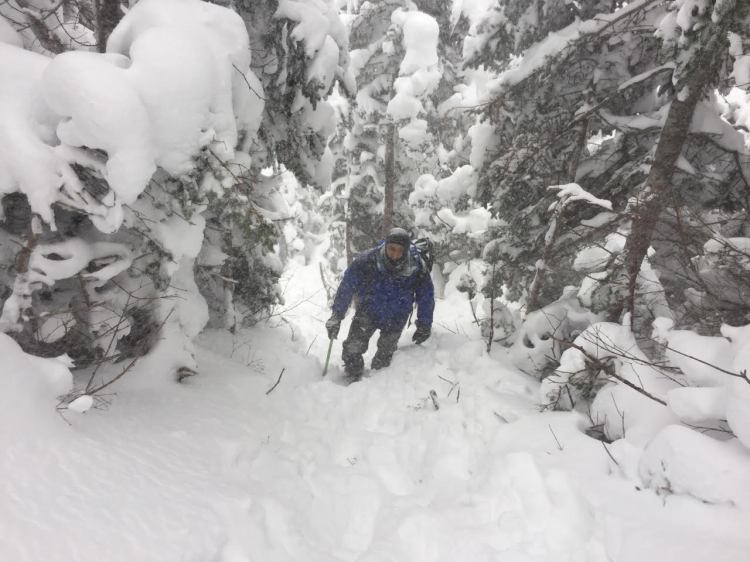 We slowly cleared the treeline, heading for shrubs, which is where we encountered a fierce wind and swirling snow. We pushed on for a while; our steps were slow and labored. The wind–which had been forecast to pick up during the day–was strong enough on occasion to push me back down the slope I was attempting to move up on. I followed Nick, who kept breaking trail, but even his steps were quickly wiped out by the snowdrifts that came cascading down. My goggles were fogging rapidly, and my slightly shortsighted vision meant that I kept misjudging the depth of the snow in front of me. Indeed, the swirling snow and poor visibility meant that at one point, I lost sight of my leader and had to call out to confirm his location. (Thankfully, Nick was only a few meters ahead.) Finally, Nick walked back down the slope, and suggested we call it off; unsurprisingly, I agreed. Conditions were pretty hostile; we were moving too slowly; we ran many risks in pushing on. (Especially as, I suppose, Nick must have reckoned that my inexperience was unlikely to be an asset in pushing on.)

Our return wasn’t much easier; I kept slipping and sliding, finding it hard to internalize the simple lesson to place my cramponed heels first on the downward slopes. At one point, the endlessly patient Nick’s patience ran out, and he suggested I rope up for going down as well. I agreed; I had had my ice axe knocked out of my hands once on one slip, and a repetition would not be pretty. Fortunately for me, my slip-sliding adventures ended quickly thereafter, and we made it down to the end of the trail safely. We had been unsuccessful in making to the summit; a disappointment for sure, but it wasn’t clear to me that I could have pushed on in those conditions. (This photo gives some indication of what it was like in the Dragons’ Lair just below the Lion’s Head; as you can tell, I had my head down as I tried to move on.)

I was cold, exhausted, and sore all over once we had finished; I drove back to my motel, changed out of my wet clothes, stripped off the multiple layers (five on top, three below), and tried to warm up. Four of my fingers and two of my toes still complained about their treatment by the cold; one blister on a finger showed I had acquired a little frost-nip. Sustained further exposure might have made things worse.

All in all, winter climbing was an educational and humbling experience.; I need to be stronger, more practiced, more flexible, mentally more resilient. Like most things pertaining to the mountains, you get your ass kicked, but still harbor a curious desire to repeat the dose. Which I will, soon enough.