Climbing volcanoes in Ecuador has been a long-held dream of mine. From January 13th to the 19th of this year, I took a few baby steps toward realizing it: I traveled to Machachi, Ecuador to try to hike and climb Cotopaxi and Chimborazo, Ecuador’s tallest volcanoes. I failed; both volcanoes were not prepared to receive me on their summits; the weather did not co-operate and was well and truly ‘socked in’ with persistent rain and snow higher up. I traveled partway up Cotopaxi, returning from 5300 meters after snow conditions were deemed unfit for us to continue; the Chimborazo attempt was called off before commencing thanks to reports that avalanche conditions prevailed on its slopes. Still, I managed to squeeze in hikes–of varying levels–of three other volcanoes in the region: Corazon; Illiniza Norte; Ruminahui. I also spent a rewarding week at a lovely hostel–the Hosteria Chiguac–in the town of Machachi, and a wonderful weekend in Quito with an old friend. Like all occasions to travel, this one changed me emotionally and physically; I fell in love all over again with the mountains and renewed my gratitude for the folks I meet when I travel,–this time around, a pair of fire fighters from Idaho, Canadian climbers, English schoolboys, a German young man–who fill my heart with their affection and amaze me with their kindness. The world is a big place, and I will remain in awe of all it contains.

I arrived in Quito on Friday, January 11th, and after being picked up by Manuel from Andes Climbing, was driven to Machachi to check in at the Hosteria Chiguac. Next morning, my guide Marco arrived to accompany me on an acclimitazation hike to Corazon. The hike begins from a parking lot at 4000 m above sea level and continues on to the summit of Corazon–with a funky little rocky scramble requiring some care along the way. The summit is at 4780m; we were accompanied by a dog–Senor Perro–who proved to be a remarkably skillful scrambler and hiker. After a quick lunch, we headed back down, or rather, we were chased off the summit ridge by an impending thunderstorm. The next day, Marco and I headed off to climb Illiniza Norte, the less-technical of the pair of Illinizas. This is a class 3 scramble that turned into an alpine adventure thanks to the fresh snow; the most excitement came along the traverse ‘El Paseo De Morte’ and in ascending the final couloir to the summit; we roped up and Marco expertly belayed me on a couple of sections. After the summit, we ‘surfed’ our way down a scree slope to pull off a little slippery, slidy, shortcut. After a day’s rest, Marco and I attempted to scale Cotopaxi.

The day before our attempted climb, Marco and I drove to the parking lot for the Jose Rivas Refuge, and hiked up to the refuge, our jumping off point for the summit push. We ate an early dinner, checked our gear and turned in for the night at about 630PM. Wake-up was at 11PM; I drank a quick coffee, geared up, and headed out. One indication of the trouble we were to face was that we had to put on our crampons at the refuge itself, as opposed to the usual ‘crampons-on’ point at the the glacier forty-five minutes up the slope. Later, the snow grew deeper, wetter, and slippier, making progress up the slope harder and harder. Two hours and 1300 feet up the slope, our luck ran out, as Marco and other guides with other parties decided that snow conditions made it too hard to carry on. Our Cotopaxi plans having fallen apart, so did our Chimoborazo ones; besides, scouting reports made it clear avalanche risk was too high. I settled for a substitute hike to Ruminahui Central on a day which summed up the weather for the week; it began and ended in dampness, and we were chased off the peak by an approaching storm. 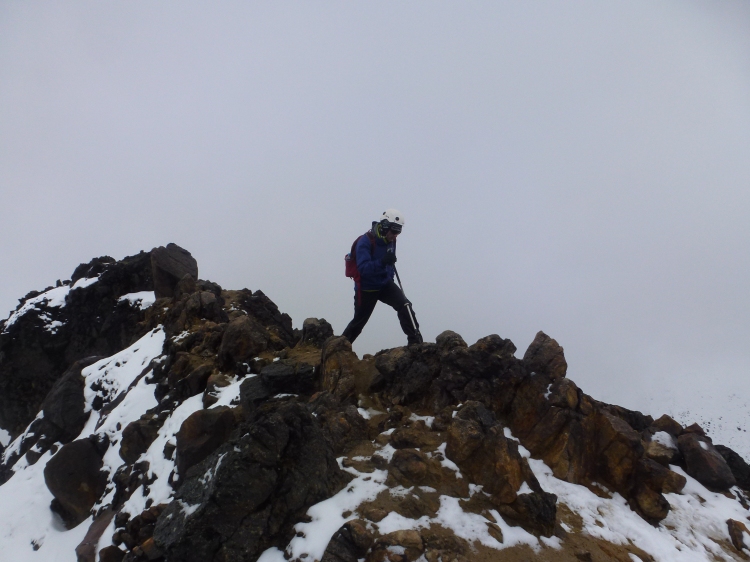 My hiking concluded, I moved to Quito for the weekend to meet an old friend and spent a couple of days of blissful indulgence, eating ceviche and various barbecued meats, strolling around, drinking delicious black coffee with coconut oil and sugar, and enjoying, all over again, the sensation of being amazed by this world’s offerings. The mountains did not co-operate this time around; but I’m patient. I’ll be back.

One thought on “Volcanoes In Ecuador: Thwarted But Happy”