In 1980, Stephen Jay Gould and Steven Selden sent their copy of H.H Goddard‘s The Kallikak Family: A Study in the Heredity of Feeble-Mindedness to James H. Wallace, director of Photographic Services at the Smithsonian Institution. The photographs in Goddard’s book of the supposedly “feeble-minded” family had appeared to confirm their mental infirmity:

All have a depraved look about them. Their mouths are sinister in appearance; their eyes are darkened slits. 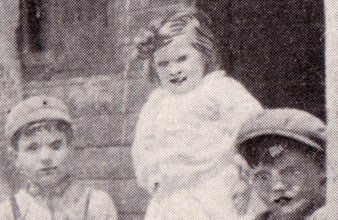 But as the photograph above indicates, and as Wallace noted:

There can be no doubt that the photographs of the Kallikak family members have been retouched. Further, it appears that this retouching was limited to the facial features of the individuals involved–specifically eyes, eyebrows, mouths, nose and hair. By contemporary standards, this retouching is extremely crude and obvious.

The intellectual dishonesty on display in Goddard’s work is but a small sample of the many instances noted in Gould’s critique of biological determinism, The Mismeasure of Man  (W. W. Norton, New York, 1980).

Of interest too, is what Wallace went on to say in his response to Gould and Selden:

It should be remembered, however, that at the time of the original publication of the book, our society was far less visually sophisticated. The widespread use of photographs was limited, and casual viewers of the time would not have nearly the comparative ability possessed by even pre-teenage children today….

The “visual sophistication” that Wallace indicates is, of course, a function of the greater prominence of the visual in modern society. Photographs, digital and analog, and moving images, whether those of the movies or television, are our commonplace companions; we record our lives, their humble and exalted moments, through a bewildering arrays of technologies and methods. Our blogs and other forms of social media are awash in these images. If the cultures that preceded ours were verbal, we are increasingly visual. Our future masterpieces might increasingly be drawn from this domain.

This swamping of our senses and sensibilities produces a greater refinement of our visual concepts and judgments. Modern cinephiles speak knowledgeably and effortlessly of cinematic palettes and visual grammars; admirers of photographers’ works offer esoteric evaluations of their correspondingly complex productions. We consider such discourses exceedingly commonplace; we are, after all, creatures whose dominant sensory modality is sight, able to examine their world from the microscopic to the macroscopic scale, from the beginning of their lives to their ends, through images.

Wallace’s invocation of our increased “visual sophistication” appropriately enough arises in the context of retouching. We are used to the altered digital image, the restored old photograph, the enhanced and corrected draft photograph; we return from vacations with a camera full of digital photos; we understand their final displayed product will be a modified one, lights and darks and colors and shades all expertly changed by our photo processing software, our clumsiness and inexpertness cleverly altered and polished out.

We are, by now, accustomed to the notion that seeing is not believing but rather, the opening salvo in a series of investigations.

2 thoughts on “The Visually Sophisticated Society and “Seeing is Believing””