In September 2008, I visited Waterloo. I was visiting Brussels for work, and on arriving there in the morning, quickly realized that the best way to spend my first, jet-lagged day would be to travel to the site of Napoleon’s Last Stand. Armed with directions, train time-tables, a restless stomach, a camera, a thin sweatshirt, and my copy of War and Peace–I had started reading it a few days prior to my trip–I set off.

I promptly fell asleep on the train out of Brussels, but awoke at the correct station–Braine-l’Alleud–to scramble out onto the platform. On exiting the station, I quickly realized that Waterloo is not like American historic sites: I was a mile or so away from the battlefield, but there were no signs, no souvenir shops, no visible indicators that I was in close proximity to a tourist attraction. Momentarily confused by my map, I asked for directions again, and began walking.  This first road-sign assured me I was on the right track:

As did various street signs. The man himself gets an avenue: 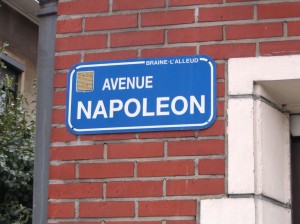 As does the ‘old bastard‘ who made the Iron Duke into a hero:

I walked through quiet, deserted, windswept streets, still wondering how it was that more signs of museum and battlefield commercialization were not visible. The first sight of the battlefield was the Butte Du Lion:

And then, walking on for a bit, I arrived at a small cluster of buildings, which included the museum and some shops. Commercialization at last! I had been starting to think I was on a different planet. 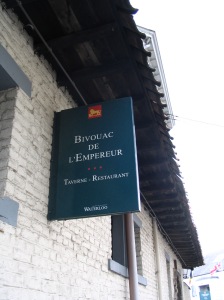 (I would stop at the Le Cambronne Taverne for a beer afterwards.)

A map showing the order of battle and force deployments was available inside the museum: 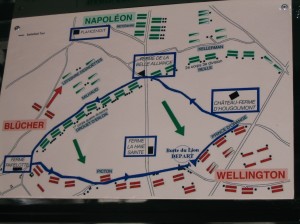 The battlefield itself lay behind the museum; nondescript fields, really, through which I toured on a little tram. (Some of the topography of the region has changed, of course; the famous slopes that allowed Wellington’s forces to seek cover from French artillery are no longer visible for instance, having been dug up to provide material for the Butte Du Lion.)

After finishing my battlefield tour, I ascended the Butte Du Lion for a panoramic view of the battlefield. (All the while I was being lashed by cold winds that raked the region.) 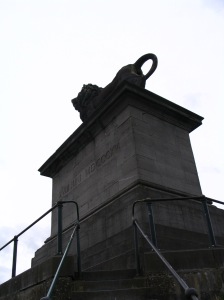 In case you had forgotten, here is the date of the battle: 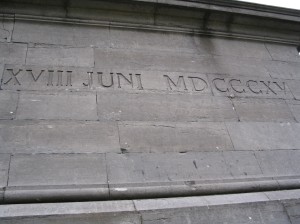 Part of the panorama:

Then it was time to check out a ‘circular naturalistic painting by Parisian artist Louis Dumoulin…on a canvas some 110 meters in circumference….accompanied by a soundtrack of battle noises including blaring bugles and cannon fire:’

This part of the painting depicts Ney‘s doomed cavalry charge:

Incidentally, Ney also has an avenue named after him. Some consolation, I suppose. 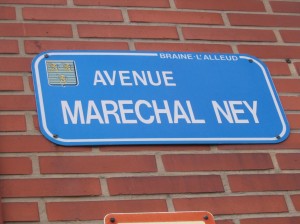 The Waterloo Museum also includes the Musee De Cires, featuring wax works–the one below possibly depicting the  fateful delay on the first morning.

And a Napoleon death mask:

Afterwards, as I sat at the Le Cambronne Taverne, drinking my beer, and trying to warm myself after being exposed to that grey, cold day, I wondered again about the curiousness of Waterloo as a site for Napoleon’s greatest defeat: his vanquisher, the Duke of Wellington, is scarcely visible. Napoleon’s last triumph, perhaps.